Linux is an operating system that evolved from a kernel created by Linus Torvalds when he was a student at the University of Helsinki. Generally, it is obvious to most people what Linux is. However, both for political and practical reasons, it needs to be explained further. To say that Linux is an operating system means that it's meant to be used as an alternative to other operating systems, Windows, Mac OS, MS-DOS, Solaris and others. Linux is not a program like a word processor and is not a set of programs like an office suite. Linux is an interface between computer/server hardware, and the programs which run on it. 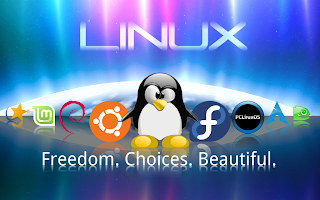 There are many different versions of Linux, and unlike other commercial operating systems that are controlled, distributed and supported by only one company, the core of Linux is free to distribute and use. This creates a situation in which numerous companies, organizations and individuals have developed their own specific version of the Linux operating system. When these versions are made publically available for use, they are known as “distributions”.

1. Fedora :- Fedora is a Linux-based operating system, a collection of software that makes your computer run. You can use Fedora in addition to, or instead of, other operating systems such as Microsoft Windows™ or Mac OS X™. The Fedora operating system is completely free of cost for you to enjoy and share.

2. Ubuntu :- Ubuntu is an ancient African word meaning 'humanity to others'. It also means 'I am what I am because of who we all are'. The Ubuntu operating system brings the spirit of Ubuntu to the world of computers.

3. Linux Mint :- The purpose of Linux Mint is to produce a modern, elegant and comfortable operating system which is both powerful and easy to use.

1. Red Hat :- Red Hat, the world's leading open source and Linux provider, What began as a better way to build software openness, transparency, collaboration soon shifted the balance of power in an entire industry. The revolution of choice continues. Today Red Hat is the world's most trusted provider of Linux and open source technology.

3. OpenSUSE :- The openSUSE project is a worldwide effort that promotes the use of Linux everywhere. openSUSE creates one of the world's best Linux distributions, working together in an open, transparent and friendly manner as part of the worldwide Free and Open Source Software community.

5.  Slackware :- Slackware was originally derived from the Softlanding Linux System (SLS), the most popular of the original Linux distributions and the first to offer a comprehensive software collection that comprised more than just the kernel and basic utilities.

What is linux?
Why linux?

About Linux Terminal
How to Access Terminal
Linux Commands